Mapping
You are here: Home / Mapping / Chinese Stores / 460 Spadina Ave., Toronto, Ontario, Canada
According to the City of Toronto Directories, the first building constructed on the site of 460 Spadina must have been established around 1888. This seems to be the case because, in 1887, lots 365 – 497 where College St. intersects were listed as: “stables, house, private grounds, Methodist Church, vacant lot, unfinished house, vacant, vacant, vacant lot.” In the City Directories for 1888, lot 460 is listed under “White Alfred.” Alfred White was the registered in the City of Toronto Tax Assessment Rolls for St. Patrick’s Ward in 1888: aged 42, occupation was “gents furnishing” with 7 family members. The size of the lot of land was 234 x 188 and on that lot was a brick building sized 18 x 266 / 14 x 31. 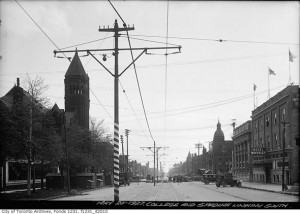 According to Goads Fire Insurance Plans from 1903 (above), this building was located at the South-Western corner of the intersection of Spadina Ave. and College St. In these plans, the building is coloured red, which indicates that it was, indeed, a brick building. The photo (above) shows what the intersection looked like during the late 1920’s. 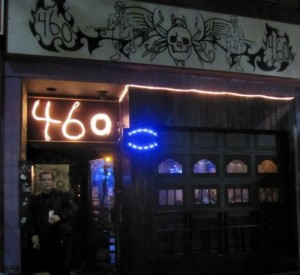 Today that building bears the same address and is home to The 460 Bistro Bar. The woman who runs the business is named Mona and she moved from Southern China under a decade ago. Her bar has become somewhat of a legend among Toronto’s underground art and music scene. 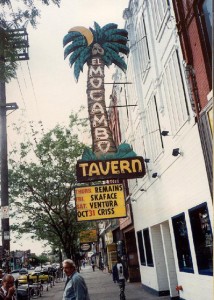 Mona recalls that the previous business owner of 460 Spadina was a Vietnamese man named John. The City of Toronto Directories for 2001 do in fact list “John’s Restaurant” at that address.

Mona also recalls that before John, two Chinese women named Nancy and Michelle ran a restaurant and bar that served breakfast, lunch and dinner – apparently it was quite popular among University of Toronto students. The City of Toronto Directories for 1980 and 1990 simply list “Coffee Shop.”