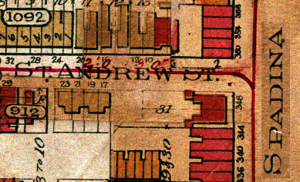 In accordance with Valerie Mah’s research, the City of Toronto Directories from 1900 and the Tax Assessment Rolls from 1901 do verify that, at that time, 352 Spadina Ave. was occupied by a person by the name of Mah Tang.

Valerie Mah’s research (in her thesis The Bachelor Society A Look at Toronto’s Early Chinese Community 1878-1924), which included a letter from Thomas Humprhies to Reverand MacKay, listed 95 Chinese establishments in Toronto on July 25 1900. That letter stated that 352 Spadina Ave. was occupied by Mah Tang and 3 other Chinese people.

The Tax Assessment records from 1901 state that Mah Tang was a tenant of Thomas Hook. His occupation is listed as “laundry.” Mah Tang’s business must have run out of the street-level portion of the building, because there is tax listing for another tenant that lived “over 352” named Patterson John J. (This upstairs tenant was recorded as 44 years old, with 6 family members, 3 children. The owner of the upstairs property was Edward Leadlay). Mah Tang was recorded to have 2 “Persons in Family” and no children.

According to Goads Fire Insurance Plans from 1903 (image attached), this building was located at the North-Western corner of the intersection of Spadina Ave. and St. Andrew St. In these plans, the building is coloured red, which indicates that it was a brick building.

Today that building bears the same address and is home to Minh Cau Jewellers who sell jewellery, watches and optical glasses (storefront image attached). Their website can be seen here: http://www.minhchau.ca/