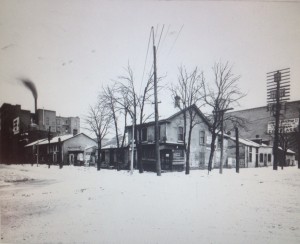 This is a photo that was taken around the area of Bay and Queen, roughly around 65-80 Queen Street West 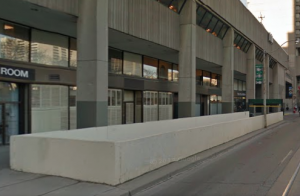 After: Pre-occupied by the Sheraton hotel as well as small businesses, this is what the space looks like today.
Photo taken: 2014

In 1900 during the month of July, Thomas Humphries wrote a letter to Rev. MacKay regarding the Chinese occupancy being held within Toronto. One of the addresses associated with the Chinese in this letter was 79 Queen Street West. It has been recorded within the Toronto Archives that early settler Frank Lee migrated into Canada and became the tenant of 79 Queen Street West within the year 1899 (1). However, he was not the owner of the place — the property was owned by Toronto’s General Hospital (2). Although he was the resident along with three other residents (although it was not recorded the age nor the gender of any of the residents), his occupation was undisclosed (3). He continued to live there for an additional two years up until 1901 when it was documented that there was a new owner named Arthur Stevenson (4). Throughout the years, Toronto became a prevailing city that was in a high-demand for modernistic expansion. With the building of the New City Hall and the formulation of the subway lines, residential homes within the area were being torn down to make room for the developing city. 79 Queen Street west is no longer existent as an independent space. Currently, it is now pre-occupied by the Sheraton Hotel.

It was difficult to find the before picture since it was not a business but rather just a home for Chinese residents.