Mapping
You are here: Home / Mapping / North America Maps / The Chinese in Early 20th Century Toronto: 82 Gladstone Avenue
In Valarie Mah’s paper Bachelor Society, in 1900, 82 Gladstone Avenue was occupied by Chinese immigrant Lew Mo Kee. According to the city directories, 82 Gladstone was vacant before Kee resided in 1900-1901 being the first Chinese resident to make it a laundry business. After his departure in 1901, another Chinese resident, Bong Mark, continued the laundry business and after 4 years in 1905, the business previously occupied by Wood Yong still remained. It appears the occupation of running a laundry lacked permanence and was a mere response to “the demand of rapidly growing urban economy by providing quality, low cost laundry service to a workforce of single men” (Mah, 40). Interestingly, prior to Kee’s moving, 82 Gladstone in 1898 was a Public School with the tenant and caretaker, Ritchie Duncan. The progression of this area is evident through the changes of residence and the use of building.

According to taxes of 1901, Kee was a tenant at 82 Gladstone which was owned by Matthew Parsons, owner and trustee of the Presbyterian Church. Mah reports there are three other Chinese immigrants taking residence in the same building. However, observing the accessible rolls of 1900 in Ward 6 division 2, it seems that this number may be an error and that there were actually five individuals are connected to the residence. In others words, it is possible that Kee was living with his family in 82 Gladstone Avenue.  Chinese immigrants living with their families in the early 1900s were, however, a rare phenomenon. Most in men in Toronto Chinatown were “bachelors” and “there were only 13 Chinese families among 2035 Chinese in the city in 1921(Mah, 37), therefore there must have been even less Chinese families in Toronto in 1900. Furthermore, a headtax for Chinese coming into Canada had been established and the “$50 a head was a financial hardship” for the Chinese making it very hard to believe that the residents as 82 Gladstone Avenue were Lew Mo Kee’s actual family (Mah, 27). 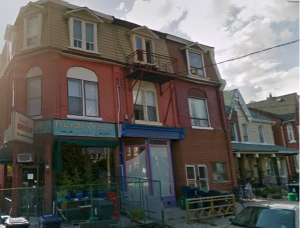