The Chinese community in Canada faced many challenged due to the Chinese Exclusion act prohibiting many working residents from bringing over their wives and children. Though the Exclusion Act was repealed in 1947, discriminatory policies and attitudes remained. The same year the Exclusion act was repealed the Prime Minister Mackenzie King stated  “‘people of Canada do not wish, as a result of mass immigration, to make a fundamental alteration in the character of our population. Large scale immigration from the Orient would change that fundamental composition of Canadian population'” (Lai 121). In addition, the Chinese residents who wished to bring over their wives and children were required to produce evidence regarding their loyalty to Canada. Since many were not official citizens it was impossible for many to bring over their family. It wasn’t until 1967 when the federal government, “…issued one set of immigration rules for applicants for all countries, allowing the Chinese to enter Canada based on their own merit” (“A History of Exclusion”). In addition, in 1970 Canada and China made an agreement so Chinese Canadian residents could sponsor their relatives in China, reuniting many families (Chan 101). 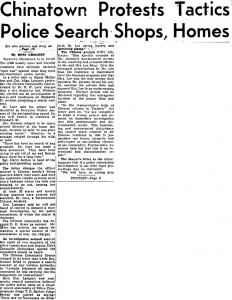 On February 16th 1949 twenty homes were illegally entered and searched by police officer Jarman who led the anti gambling squad. In several cases the police officer not only searched the businesses but entered into the living quarters against the will of of the Chinatown store owners. This illegal raid caused Chinatown unofficial mayor of Chinatown Dr. Lore to write and open letter to Mayor McCallum and Con. Allan Lamport declaring ‘open war’ on these discriminatory offences. Allan Lamport and other community officials suspected that the search occurred because of the Police Commissioner Judge Barton’s comments regarding Chinatown. He was quoted claiming that, “‘There are no businesses on Elizabeth St, but eating places and gambling places'”. In the open letter Dr. Lore claimed that the series of raids was a “‘…humiliating and unwarranted disturbance has caused much concern to all Chinese residents in that it jeopardizes our honour, integrity and self-respect as law-abiding citizens of our community. Furthermore we cannot help but feel this is an intentional and discriminatory insult'”. 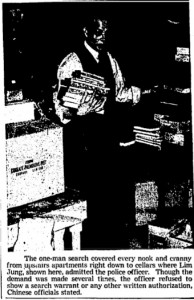 Lim Jung was one of the twenty residents whose premises were searched. Though he protested the search continued and the police officer searched “…every nook and cranny from the upstairs apartments right down to the cellars”. In addition the officer refused to produce a search warrant, or any legal document for the search in question. 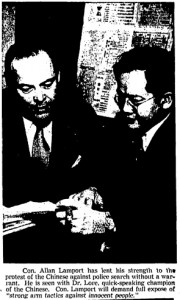 Following the incident on Elizabeth St. Allan Lamport and Dr. Lore teamed up to defend the rights of the Chinese community. Dr. Lore claimed that the police should be focus on more pressing and hostile crimes occurring in the city at the time. Dr. Lore defends the Chinese men living alone in Canada unable to being their loved ones to Canada due to the strict immigration laws. He claims, “‘Ninety per cent of our people here are bachelor men…Many have no understanding of Western ways. They have no women. They have no pastime other than movies. So they join the clubs and their gambling is more amusement than anything else.'”

On February 24th 1949 it was reported that Allan Lamport requested a board to be established by the Mayor McCallum to deliberate on what policies could be put in place to ensure the civil rights of the Chinese citizens were protected. They suggested that police be restricted in their abilities by issuing codes to be followed and a civic civil rights committee. In addition one of the member of this board, Eamond Park MPP suggested a, “…revision of …federal immigration laws”. Furthermore he claimed, “…entry of Chinese women into Canada would go a long way toward solving the difficulties now faces by the Chinese minority”.

Judge Barton Asked to Step Down

Following discriminatory remarks, and raid Judge Barton is asked to step down. “Lamport would Replace Barton on Commission Over Chinatown Clash.” The Globe and Mail (1936-Current) 4 Mar. 1949: 7. ProQuest. Web. 20 Mar. 2015.

On March 4th 1949 Allan Lamport asked for Judge Barton to resign his position as police commissioner. A source claimed, “‘When one in such an important and responsible position becomes biased, it is disturbing to all fair minded citizens…The attorney-general should see no other course but to make another appointment in his place on the police commission'”. Unfortunately Judge Barton remained in his position. However the call to remove him still suggests eroding discrimination towards the Chinese c0ommunity among the city employees.

This event highlights the some of the core that surrounded the Chinese community in Toronto as an offspring of the strict immigration laws. The immigration laws resulted in a ‘bachelor society’. The men gambled because they had lonely personal lives, and the various attacks on these gambling rings resulted in perpetuating the issue rather than solving it. Dr. Lore highlighted the issues faced by the Chinese community as well as the overt discrimination through police actions. Through the attempts at resolution within the Toronto government it is clear that this movement resulted in a change in dialogue surrounding Chinatown, as well as a strengthening in communication and respect between government officials such as Allan Lamport and Dr. Lore. Although it wasn’t until 1967, eighteen years later, that the immigration laws were jettisoned of discrimination towards the Chinese, this event represents a step towards equal opportunity and treatment in Canada for the Chinese immigrants.

The Hand Laundry; A Chinese Legacy Chinatown Restaurants and the Employment of White Waitresses
Scroll to top