You are here: Home / Portfolio / Chinese Women’s Groups In Ontario 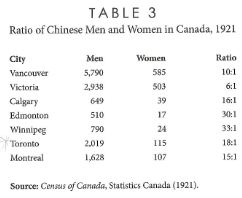 Population of Chinese In Canada. Source: Chan, Arlene. The Chinese in Toronto from 1878: From outside to inside the Circle. Toronto: Dundurn, 2011. Print.

More so, the result of the scarce number of Chinese women living in Canada can be attributed to the law passed in the year of 1923 called the Chinese Immigration Act. The Chinese Immigration Act was also known as the Exclusion Act. The Exclusion Act prevented and affected the ability for Chinese Canadian men to bring their wives and children over to join them in Canada.

“1951: Toronto’s Chinese Population was about 3,000. Ten years later, the number increased to 6,700 as a result of the wives and children of the early Chinese immigrants finally coming to Canada.” – City of Toronto Archives

In the year of 1959, a newspaper article from the Toronto Star writes about the journey a couple had gone through until they were finally able to wed one another. Their journey included the struggle they faced through the effects of the Exclusion Act. After the loosening of the immigration policies, John Chong was able to find a wife and bring her to Canada to make a life together.

After the loosening of immigration laws, Chinese Canadian men, like John Chong from the Toronto Star article, were allowed to have the opportunity to bring their wives and children over to Canada. Most of the Chinese women who arrived in Canada had little to no knowledge about the language or the customs of the country. As a result, groups were organized through churches that were directed to help Chinese Canadian women integrate into Canada. Many of the organizations for women were developed around the 1950’s and by the Presbyterian Churches. The women’s groups were also known as ‘active groups.’ 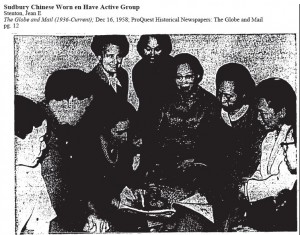 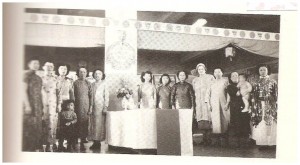 The group of women in the first photograph depicts “Ontario’s largest Chinese women’s group outside Toronto” in Sudbury (Stenton). The women are part of the Chinese Women’s Missionary Society, which is run by the Knox Presbyterian Church. The article from The Globe and Mail informs us that an approximate of fifty Chinese Canadian women meet bi-weekly to develop new skills, like learning English and also the customs of Canada. This is quite similar to the groups that were organized to help the Chinese men, who were new to Canada, learn English in the early 1900’s as well. Apart from learning English, they also receive help to develop skills such as cooking and baking, too. Additionally, the women sew for hospitals, visit hospitals, do Bible study, and help sponsor an annual Chinese tea day. 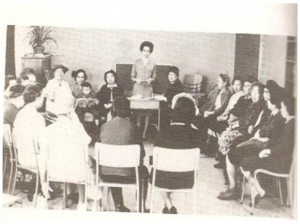 This photograph from Jin Guo’s novel, Voices of Chinese Canadian Women, displays a meeting for the women’s group that is located in Toronto. Toronto is home to larger organizations of the church organized women’s groups. This is mainly due to the city’s closer proximity to the Chinatown located in downtown Toronto, where a larger population of Chinese Canadians choose to reside.

Why Women’s Groups Are Important

For example, in Arlene Chan’s book, The Chinese in Toronto from 1878, she mentions the influence of the churches allowing many Chinese Canadian women to be able to attend university. Agnes Chan completed her studies in nursing in the year of 1923 and went on to be the first Chinese nurse to graduate from the Women’s College Hospital School of Nursing. Victoria Cheung graduated from the University of Toronto’s School of Medicine. Cheung was the first woman to intern at the Toronto General Hospital and also became the first Chinese Canadian woman to become a doctor. Both Chan and Cheung were able to credit some of their success to the churches and groups who gave them various forms of support, including financial support.

Therefore, the Chinese Canadian women who joined the women’s groups around the 1950’s in Toronto, Sudbury and other places, were surely entering a community that provided support in any such way to influence their success, whether it was in learning English or inspiring them to pursue a career. These women’s groups can be especially helpful to those who only work or take care of their kids since it allows a different experience outside what they’re normally used to. As the article from The Globe and Mail states, “For most of Sudbury’s Chinese women, this group is the only activity they have, since they do not speak much English.” Moreover, women’s groups that were organized for Chinese Canadian women are important in many ways, through the unexpected support, a different sense of experience, new opportunities, and the chance to meet new friends.

Chan, Arlene. The Chinese Community in Toronto: Then and Now. Toronto: Dundurn, 2013. Print.

Chan, Arlene. The Chinese in Toronto from 1878: From outside to inside the circle. Toronto: Dundurn, 2011. Print.