You are here: Home / Mapping / North America Maps
According to Valeria Mah’s thesis paper The Bachelor Society, 309 College Street in the early 1900s was occupied by a Chinese bachelor named Charlie Lung. However according to information gathered from the 1899 and 1903 Goad’s Fire Insurance Plans, the 1900 and 1901 Toronto City Directories and the Toronto Assessment Rolls there was no one living at that address. In fact, there was no building at 309 College Street. It was an empty lot according to the Goad Insurance Maps with no structures.

Despite this anomaly, Charlie Lung does appear in the City Directories of 1900 and 1901 however he is listed at 697 Yonge Street not 309 College. This could mean that there were more than one Charlie Lung’s in Toronto. The 1898 Assessment Roll has no listing for 309 College Street but there is a Charlie Lung listed at 313 College Street. According to the information, Lung ran a laundry, was the householder, and lived alone. There were no other listed tenants or family members. The building itself was owned by Florence (last name is illegible) from Montreal.

However in the 1901 Assessment Roll, Charlie Lung is listed at 313A College Street owned by Gordon Jones. He still ran a laundry business and was a householder. This might be explained by the rapid growth of the city which altered street numbers. It is not likely that Charlie Lung moved his laundry down one house between 1898 and 1901 therefore it is probable that it was the street numbers that altered.

In both Assessment Rolls, Lung’s religion is listed as Chinese. This listing of Lung’s ethnic and racial background as a religion highlights the ‘othering’ of the Chinese in Toronto at the time and the ignorance of Chinese culture.

http://countercultures.net/design/wp-content/uploads/2013/04/countercultureslogopart3-300x106.png 0 0 Akayla Onabowale http://countercultures.net/design/wp-content/uploads/2013/04/countercultureslogopart3-300x106.png Akayla Onabowale2014-04-12 03:19:092014-04-14 21:45:44The Chinese in Early 20th Century Toronto: 309 College Street
In Valerie Mah’s thesis paper The “Bachelor” Society, Samuel Wing is listed as having lived at 100 Elm Street in the early 1900s. This fact is corroborated by both the City of Toronto Directories and the Toronto Archive’s Assessment Rolls. According to the Goad’s Insurance Plans of 1899 and 1903, the building at 100 Elm Street was made of wood and situated directly across from the Poor House. In the City Directories of 1900 and 1901, Wing is listed as running a laundry business from 100 Elm St. Wing is listed as a tenant while the actual owner of the building was Samuel Jardiene of the Home Savings and Loan Company. Jardiene was most likely a mortgage holder of some sort. Wing lived alone, with no listed tenants, no listed family and no listed children.

In 2014, the building has been torn down and fused with many other lots to form Sick Kids Hospital.

According to a letter to Rev. Mackay (July 25, 1900) of the United Church noted in Valerie Mah’s  independent research paper “The Bachelor Society”,  a Chinese man named Charlie Lee either had a business or was living at 281 Church Street. The Goad’s Fire Insurance Plan Map indicates that the property at 281 Church Street was built sometime between 1884 and 1890. Goad’s Fire Insurance Plan Map depicts the property in brown which indicates that it is was a brick building.  The Toronto City Directories for 1899 show a man by the name of Charles J. Taber, a butcher, living at the property. The property was considered to be private grounds. The following year in 1900 it was indicated to be vacant, and in 1901 the address was no longer listed within the directory. Looking through the Assessment Rolls, the only assessment roll available for the address 281 Church Street was in 1899. The information was quite consistent with the information from the directory, however the name was recorded as Tabor, Arthur J. instead of Tabor, Charlie J. Due to the fact that this person only lived at the address for a short period of time and it was accounted for as private grounds, it can be deduced that the person living there did not run any kind of business and even if he did, it would have been a private shop that was available to a few people. In 2014, the property where 281 Church Street was located is now a part of Ryerson University. The George Vari Engineering building is located at that site. 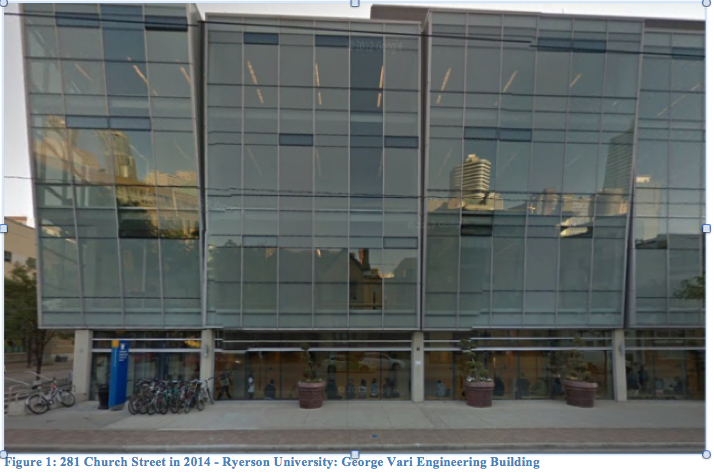 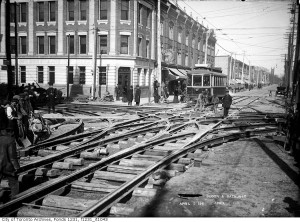 According to Valerie Mah’s thesis, “The ‘Bachelor’ Society,” Chong Sing and 1 other Chinese person lived at 807 Bathurst Street around 1900. As it turns out, after digging through the assessment rolls for 1900-1902, Chong Sing was found to actually live in the back of lot 556 on Bathurst Street, also listed as “801- back.” For the first assessment roll that Chong Sing is listed (1899 prepared for tax year 1900), there is also a clerical error regarding his name. On this roll he is recorded as “Chong Chong” (Reel 143) but all the other information lines up with the Toronto City Directories for the same years. 801 Bathurst is not listed in 1899 of the city directories (Reel 44). All subsequent assessment rolls (Reels 143, 149, and 156) list his name properly.

On the Toronto City Directories microfilm reels for 1899 to 1902 Chong Sing is listed as living at 801 Bathurst and his business is a laundry. Lot 556 or 801-back and several lots heading up on the same side of the street were owned by “Land Security Company” (Reels 143, 149, and 156). It was difficult to determine whether there was another Chinese person living at the address with Chong Sing as the assessment rolls only listed his name as a tenant. There were no other notes indicating that there was another Chinese person living there, but since lot 556, also known as 801 Bathurst, was a split lot, with Chong Sing living in the back of the lot, it is possible that whoever lived in the other half of the lot was another Chinese tenant. It is not likely though, since the front of 556 was probably where the owner of the other lots on that street lived.

Chong Sing appears to have been a Chinese bachelor, judging from his age — 26 years old —  in the assessment roll for 1900, coinciding with the year he first was recorded in the Toronto Street Directories, 1900.  His education is listed as “P” (Reels 143, 149, and 156), but according to the archivist he might have been listed as such because the owner of his building had public education and listed all tenants in his lots as having public education. Mah’s thesis states that “During the late nineteenth century agents from Hong Kong went from village to village in South China to recruit laborers for shipment from Hong Kong to Canada and other countries. They left for speculation as well as the fact that the land had been left devastated after the Tai Ping Revolution” (3). 1900, the year Chong Sing is first listed in the Toronto city directories was also the height of the Boxer Revolution and it is possible that that was another factor in Chong Sing’s migration to Canada (Harry Con et al, 75). A third possible reason for Chong Sing’s migration was that he was a sojourner Chinese immigrant who was to work in Canada until he gained enough income to go back to China and bring back a son or nephew. This was apparently more common after 1900 (5). At that time, China’s daily wages were only seven cents a day, so the prospect of working for a dollar a day in Canada was another big pull for bachelors like Chong Sing to immigrate to Canada during the turbulent late nineteenth century to early twentieth century period (5).

The laundry Chong Sing ran appears to have been successful, as assessment rolls 1900 and 1902 show his taxable income as $800 and $600, respectively. This is quite significant, as Mah describes that these early laundries needed “$500-600 and/or up to $2,000 capital…Financing could be done through the credit system of the Tong” (23). This means Chong Sing was able to make back what he owed to start his business, plus $200 dollars over that amount within his first year of opening his laundry!

Here are a few facts that will illustrate a little of what running a laundry was like during the exclusion era of Canada. All clothes were washed by hand using a washing machine that was essentially “a huge cylinder made of wood and later metal. It had a forward and backward rolling motion like two huge cylinders, one within the other” (23). The process of using this machine was complex and the laundrymen hung all the washing on drying lines inside on each side of the room (23). They washed everything: from clothes to sheets to curtains, but since laundries made small capital, they left the linens for big hotels to take care of (24). The hours for a laundry were typically “twelve hours a day and often on Sunday” (25), although it is cited in Mah’s thesis that families would take Sundays off sometimes to go to Church where it was possible to learn English (25). A popular pastime of the sojourner bachelors of Chinatowns in this period was gambling. Gambling offered a chance to socialize with one’s community, but also for the opportunity to gain a bit more money, especially for those men who are homeless. “The men [would] gather in tiny parlours hidden behind laundries, shops or restaurants or in rooms below the level of the street” to play pan tan, pai kop piu, gee fah or mah jong (61).

Today, the back of 801 Bathurst is just an alleyway between a CIBC and wholesale textiles shop. It was difficult to find any photos of the exact address from the era Chong Sing immigrated to Canada, but to give an idea of what the intersection Chong Sing lived near (Bathurst and Bloor Street West) looked like, take a look at the black and white photo attached to this article.

Con, Harry et al. From China to Canada: A History of the Chinese Communities in Canada. Toronto: Mclelland and Stewert Ltd., 1982. Print.